One of my favourite local landmarks is the splendid gateway at comically named Trotters Bottom just off St Alban’s Road. Once you’ve turned off the M25 or A1(M), heading southeast, it’s as though it welcomes you on your return home to Barnet.

It’s been fascinating discovering more about it. Firstly it’s a reminder of the important roads that historically passed through Barnet. Forking off the Great North Road at Hadley Highstone, the main route from London to the Midlands, Northwest and Holyhead (for Ireland) originally took in Kitts End and Dancers Hill before Thomas Telford updated the road network in the 1820s, creating a more direct route, St Alban’s Road. The gateway would have been clearly visible on both these routes, making a bold statement about the owners of Dyrham Park.

The British Listed Buildings website describes the lodges and arched gateway as dating back to 1790–1800 and gives detailed architectural descriptions by Pevsner written in 1977, but many other sources point to the arch being from an earlier period. Pevsner’s description applies as much to the lodges as to the arch itself. In the early 18th century, having acquired the estate in 1798 (according to the National Archives) the new owner of Dyrham Park, John Trotter constructed a Palladian mansion after the Elizabethan manor house had been destroyed by fire. The gateway and lodges could well have been part of this project, perhaps embellishing an earlier structure. What’s more these new owners of Dyrham Park give us the place name ‘Trotters Bottom’ – with ‘Bottom’ historically meaning an archery firing range.

However, the gateway structure includes what many believe to be a triumphal arch from 1660 erected by General Monck to celebrate the return of Charles II to London and the restoration of the monarchy. Previous owners of Dyrham Park (then called Durham Park or Durhams) were the Keppel family. According to Hertfordshire Garden History (Vol 2) from 1767 to 1772 William Keppel (third son of the 2nd earl of Albemarle) had the grounds landscaped into a park by Lancelot ‘Capability’ Brown, rerouting some of the roads. It’s feasible that the 17th century arch was added at that point. Keppel died childless in 1782 and John Trotter ultimately purchased Dyrham Park in 1798.

John Trotter, the first of several generations of Trotters at Dyrham Park, was a colourful and rather complex individual. Born in 1757 to a modest background, he went on to make a vast fortune from the Napoleonic Wars, firstly as a government supplier and then as the main military contractor, hiring out his own warehouses for use as government stores, later becoming store-keeper general. Allegedly, by 1807 he had established 109 depots.

When the war ended in 1815, Trotter came up with a novel idea for using some of the surplus warehousing. He suggested using his property on Soho Square as a ‘bazaar’ (at numbers 4, 5 and 6; number 7 was his London home at the time). This would be a covered marketplace where ‘respectable’ people (generally the widows and daughters of army officers) could sell their handiwork (in contrast to traditional open air markets for the ‘lower classes’). This became the Soho Bazaar, an early type of department store, and was another financial success for John Trotter who hired out the space on a daily basis. It inspired similar facilities such as the Pantheon Bazaar on Oxford Street which Gilbey’s wine merchants sold to Marks and Spencer in 1937 who demolished it and replaced it with their shop (hence the ‘Pantheon’ branch). Adam and Charles Black, a publishing house took over the premises of the Soho Bazaar in 1889 and a shop front was installed, but otherwise the handsome Georgian façade of Trotter’s warehouse at numbers 4 to 6 is generally unchanged.

Trotter was also an inventor, coming up with designs for a steam engine, frame knapsack and a curvilinear saw (winning him the Gold Medal of the Society of Arts in 1805). He also designed a pianoforte keyboard and even attempted to conceive a universal language. John Trotter died in 1833 in Connaught Place, London and his descendents continued living at Dyrham Park, making a strong impression on the local community, most notably Captain John Trotter, a missionary and aid worker who financed Christ Church.

The County Council took over the property in 1938 and it ultimately became a country club in the 1960s. However, the gateway has made a number of distinctive appearances on screen courtesy of the film studios nearby at Borehamwood and these include The Avengers, The Saint and Randall and Hopkirk (Deceased), but sadly not Only Fools and Horses! 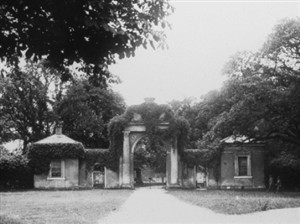