Making the most of any decent winter weather, the stylishly sedate resort of Frinton in Essex is ideal for a spontaneous day out by the seaside. Less than two hours’ drive from Barnet, you could be there in time for coffee.

Frinton is on the “Sunshine Coast” located between Clacton and Walton-on-the-Naze. It was established in the 1880s as a self-consciously genteel resort and famously didn’t have a pub until 2000. Along with the neighbouring resorts, Frinton was originally conceived by civil engineer Peter Bruff who created the local railway network. These towns are still served by the “Sunshine Coast Line” and have over the years attracted many holidaymakers from London. Before the railway opened Londoners travelled to the area by steamers which also served Suffolk and Kent.

In the 1890s Bruff was bought out by sheep dip multi-millionaire Sir Richard Powell Cooper of Berkhamsted who set the genteel tone of Frinton. Cooper wanted to attract the fashionable and wealthy retired with elegantly laid out streets, large open spaces, golf club and a summer theatre. This was in contrast to Frinton’s neighbours who he felt were better suited to day-trippers with more standard seaside attractions. Early visitors to Frinton included Edward, Prince of Wales and Winston Churchill. Although many of the grand hotels along the front have been replaced by apartment blocks, the town retains a lot of its original character.

It may sound a little dull, but this sedate quality is what makes it such a convenient and relaxing place to visit. Unlike more popular resorts like Aldeborough, Southwold and even increasingly spruced-up Southend, you can access the town easily and there’s plenty of parking. When we visited on the last Saturday of the October half term, we parked for free right down by the sea front.

There aren’t the usual British seaside attractions like a pier, amusement arcades and fast food outlets. Instead Frinton has a proper old high street (Connaught Avenue: once known as “East Anglia’s Bond Street”), well-tended public gardens, a large beach and plenty of beach huts. Numerous by-laws protect and perpetuate the character of Frinton and it does feel as though you have stepped back in time. However, we saw plenty of young families out and about along the High Street and spritely joggers, strollers and dog-walkers on the beach. There were even people in the sea (and not just in wet-suits). There isn’t much to spend money on – certainly no rides or anything like that for kids to pester you about – so it makes for a pleasantly cheap day out.

Frinton’s smart residential core is “within the gates” (on the coastal side of the railway beyond the level crossing) and based around the Avenues. These roads date from the original development and boast some fine arts and crafts houses including The Homestead by Voysey on 2nd Avenue. The plots are generous making Fronton feel more like a prosperous coastal town than a resort.

Further along the seafront towards Walton is a cluster of Art Deco houses (more than two dozen making it one of the largest collections in the country). This is the Frinton Park Estate built between 1934 and 1936 in what was originally planned as a new town comprising 1000 modernist style houses and a hotel on the front. Oliver Hill, whose work included the glamorous Midland Hotel in Morecambe, was the lead designer. It sounds like the project was ahead of its time and stalled due to insufficient funding. Investors were nervous about the flat roofs and concrete structure. On our visit – in vivid sunshine – it was like being in a corner of Miami. It’s no wonder these distinctive homes are highly sought after when they make appearances on the market.

We spent the whole day outside in the sunshine exploring Frinton, following the esplanade towards Walton and back along the beach. Lunch was an excellent fish and chip lunch from Youngs Other Plaice (117 Old Road) on a bench on the Greensward by the sea, moments from the pristine “public conveniences” with piped arias and show tunes. All very civilized.

On the way back to Barnet we stopped off at historic Wivenhoe, just south of Colchester and watched the sun go down at the quayside Rose and Crown before returning home in time for dinner. A perfect day out. 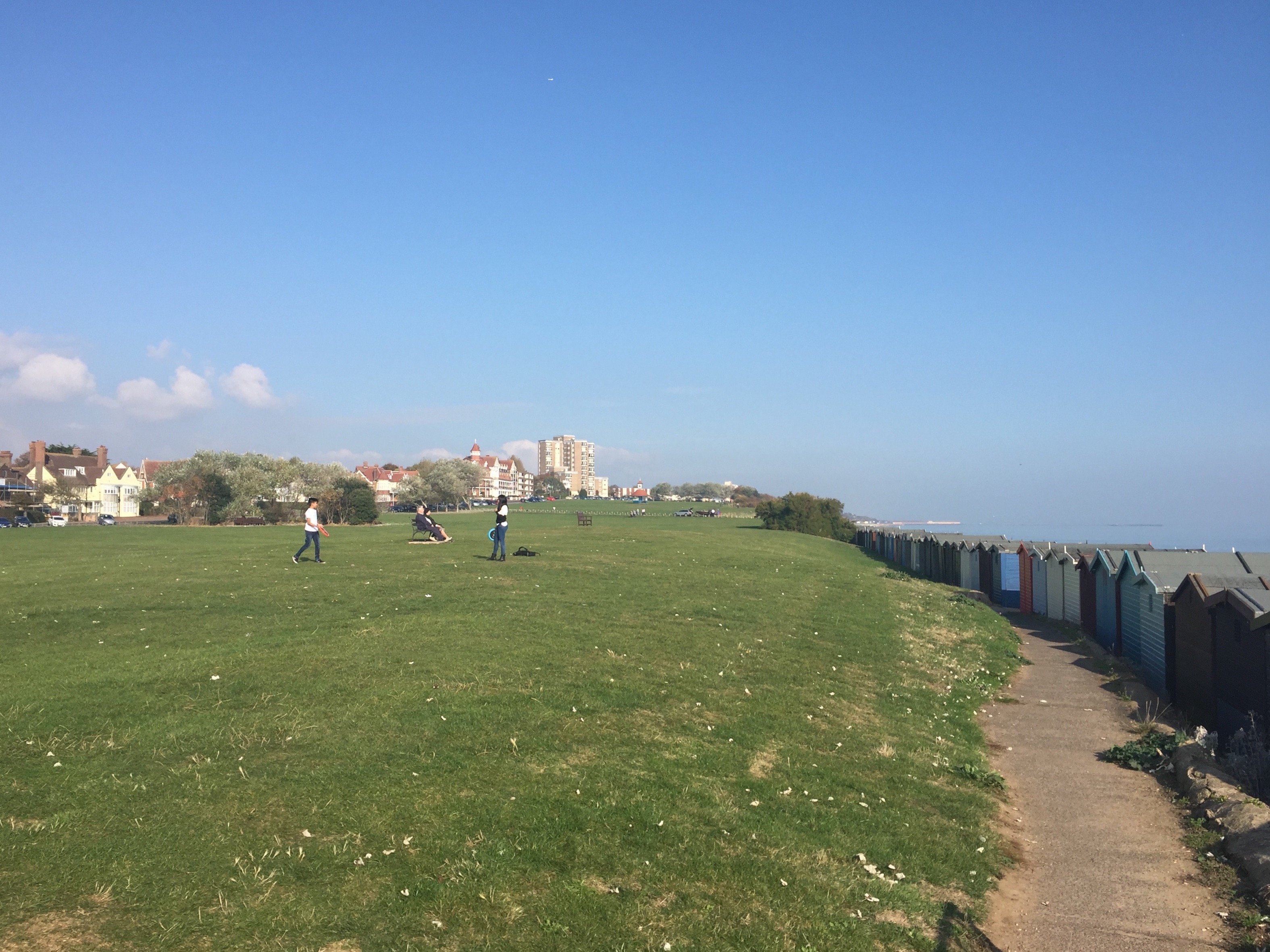 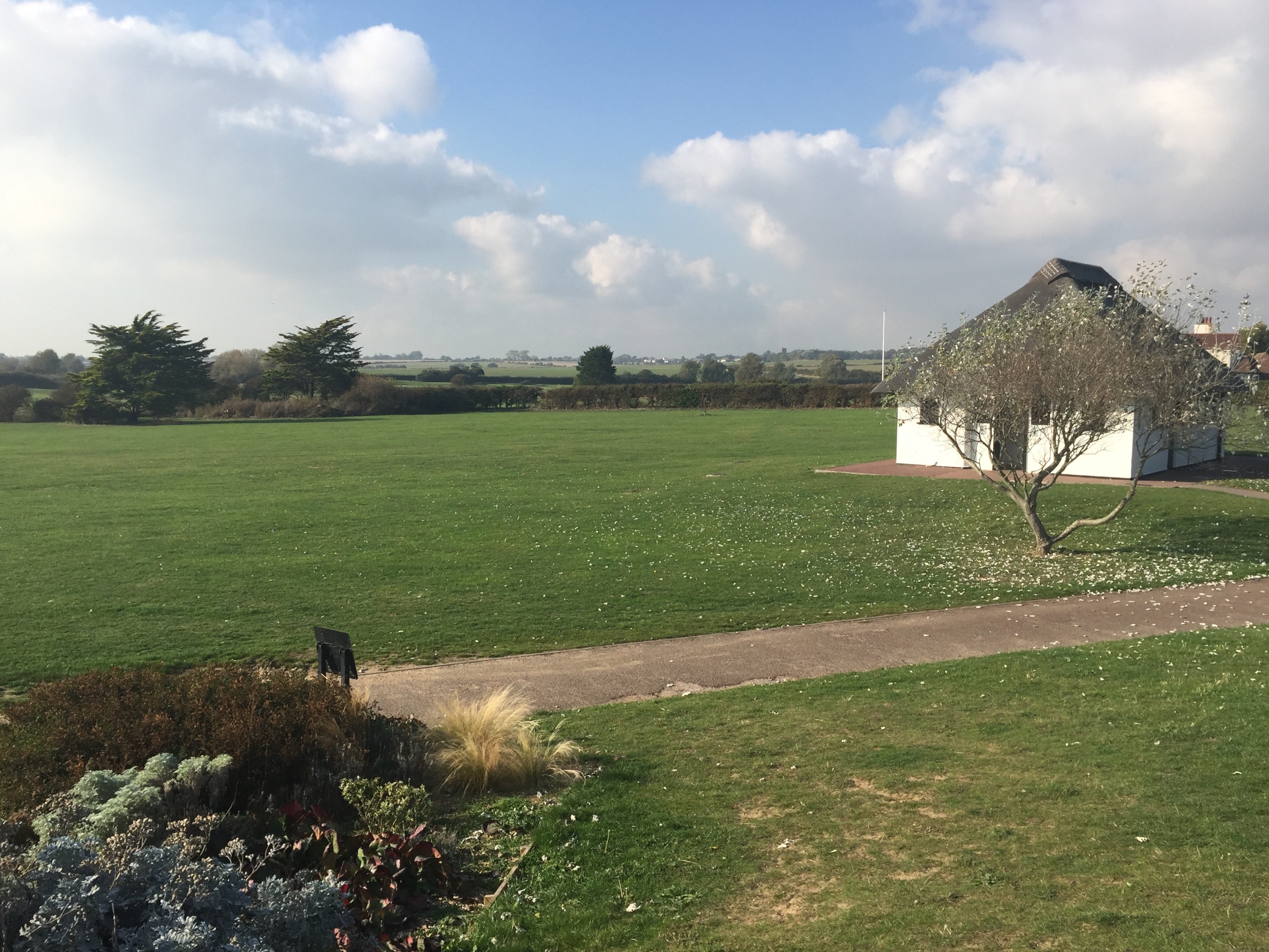 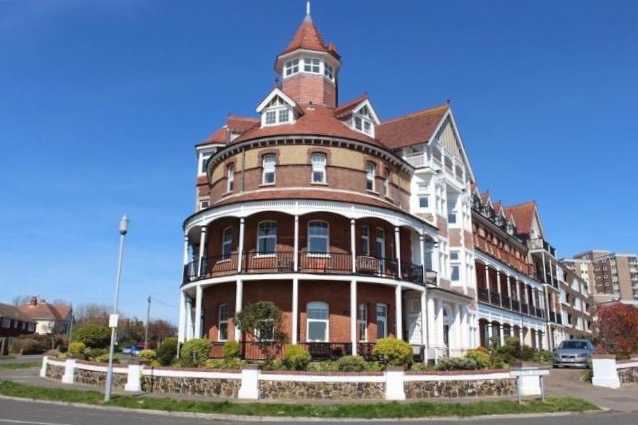 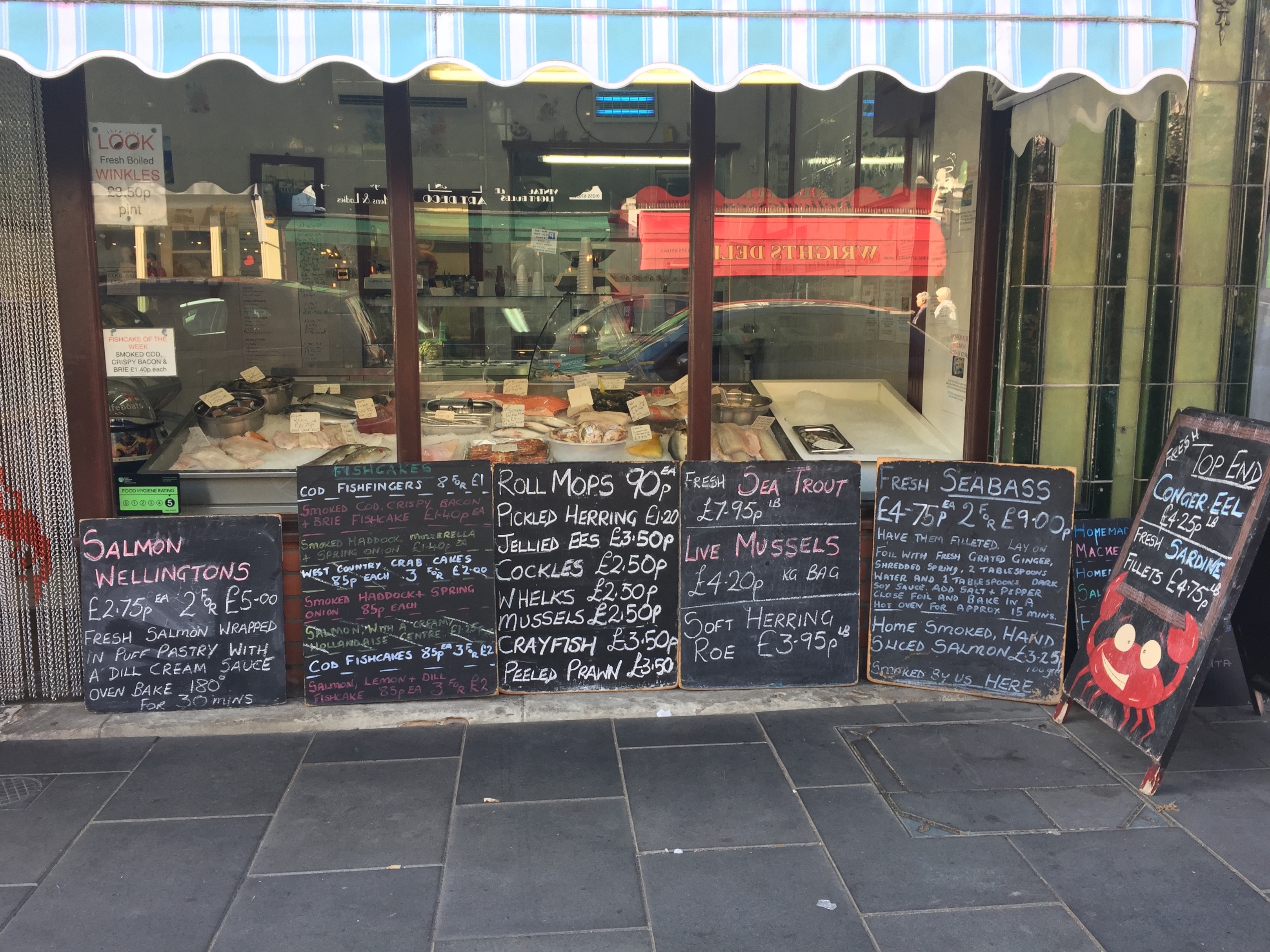 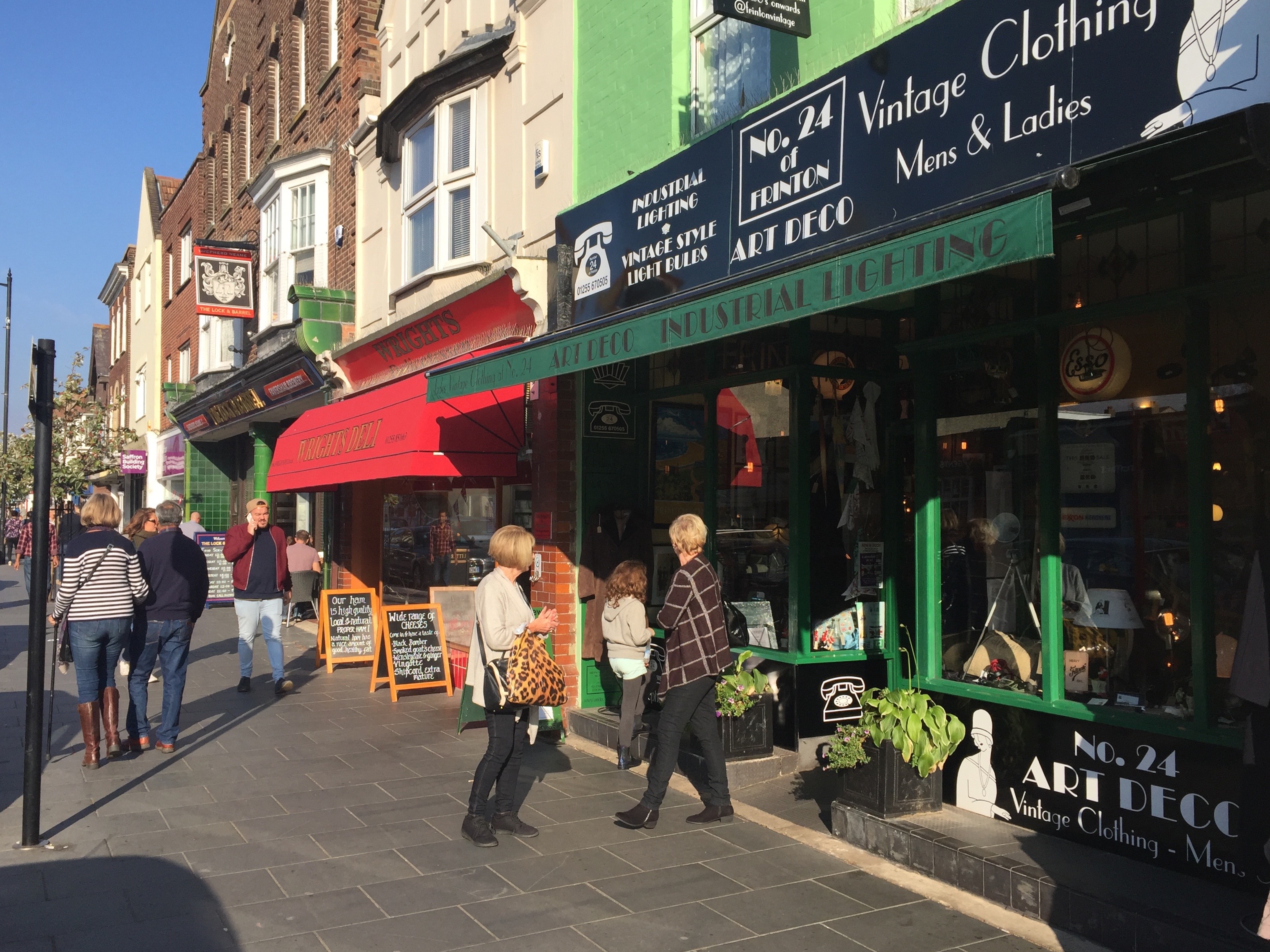 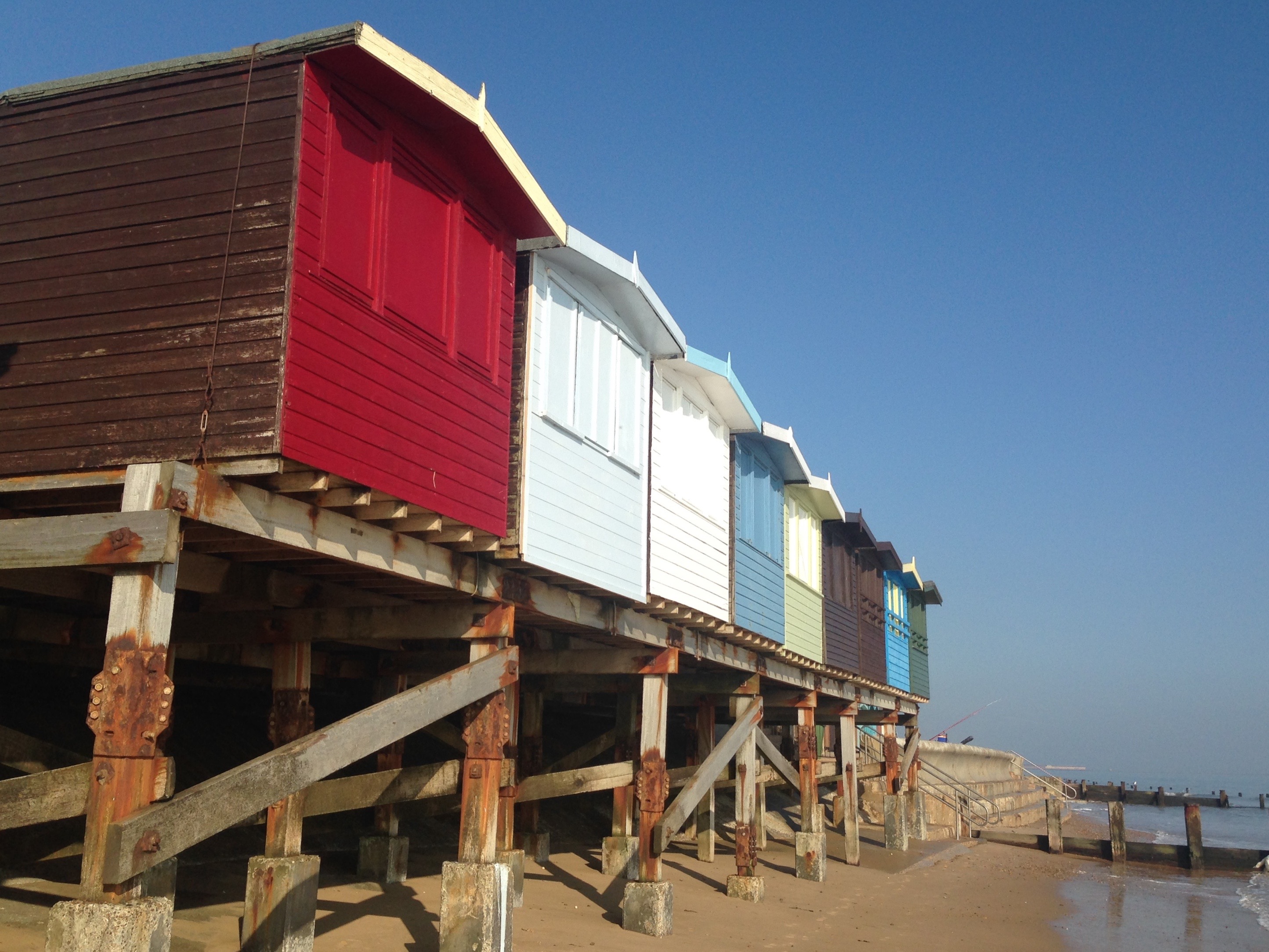 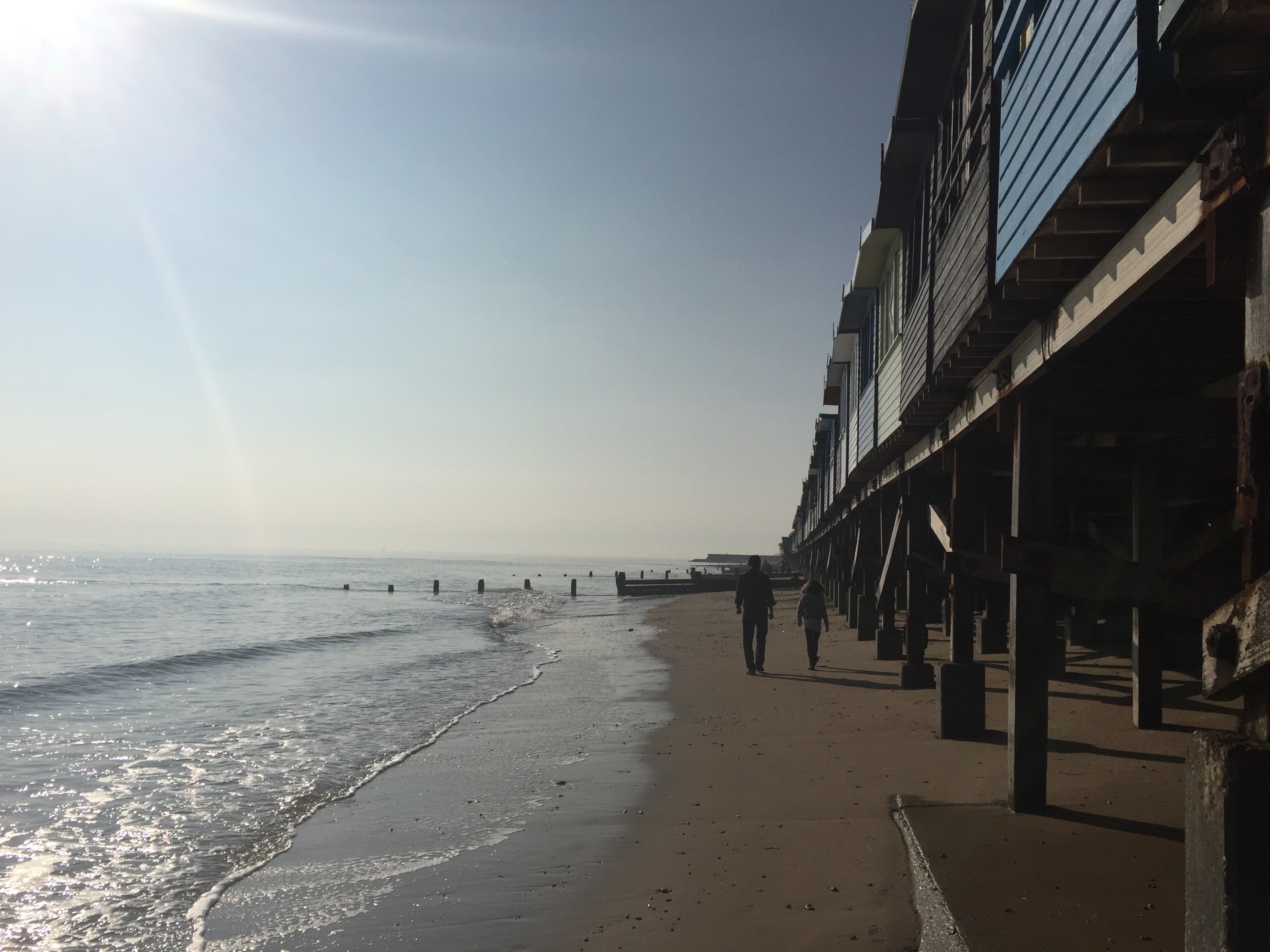 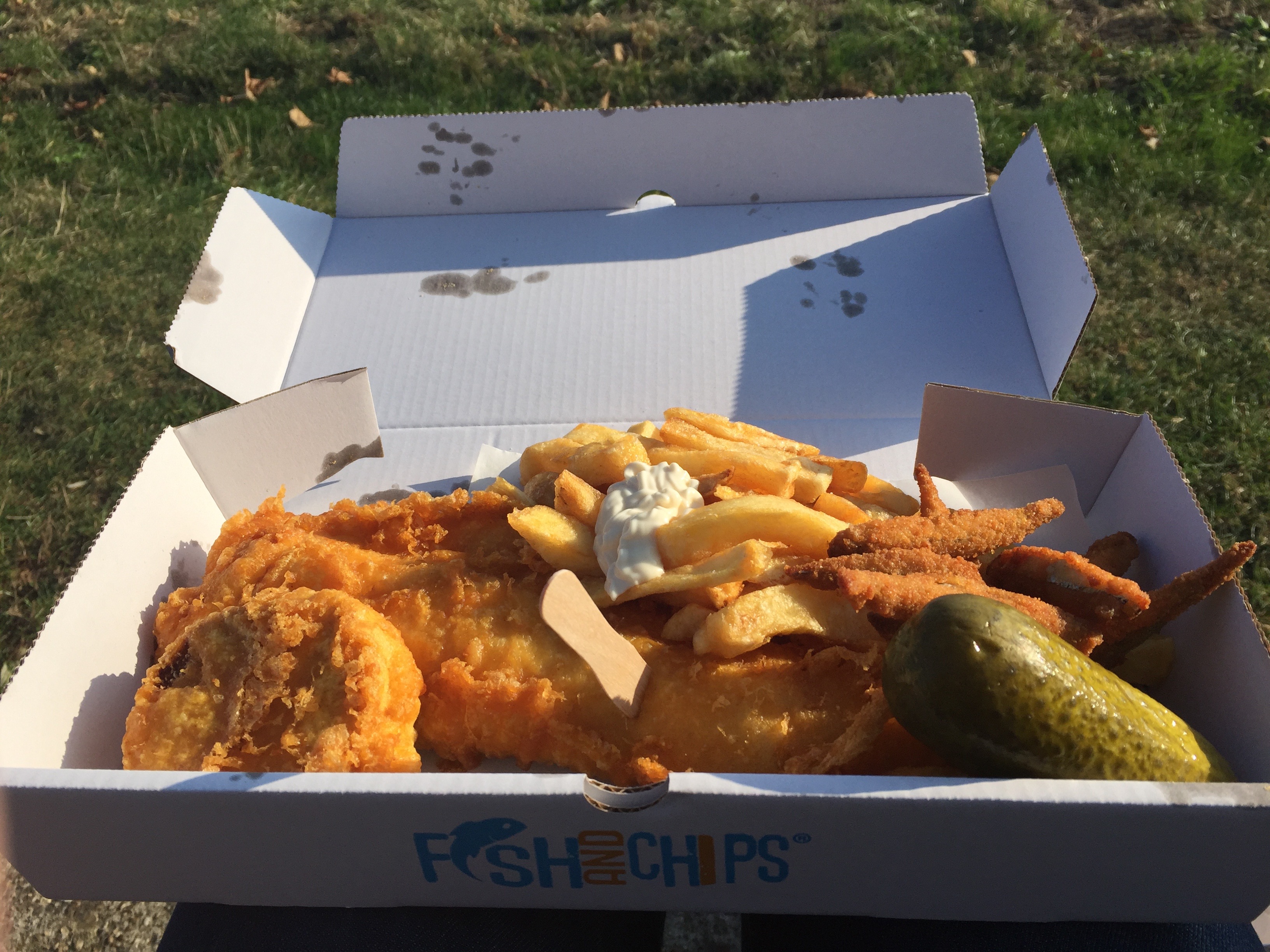 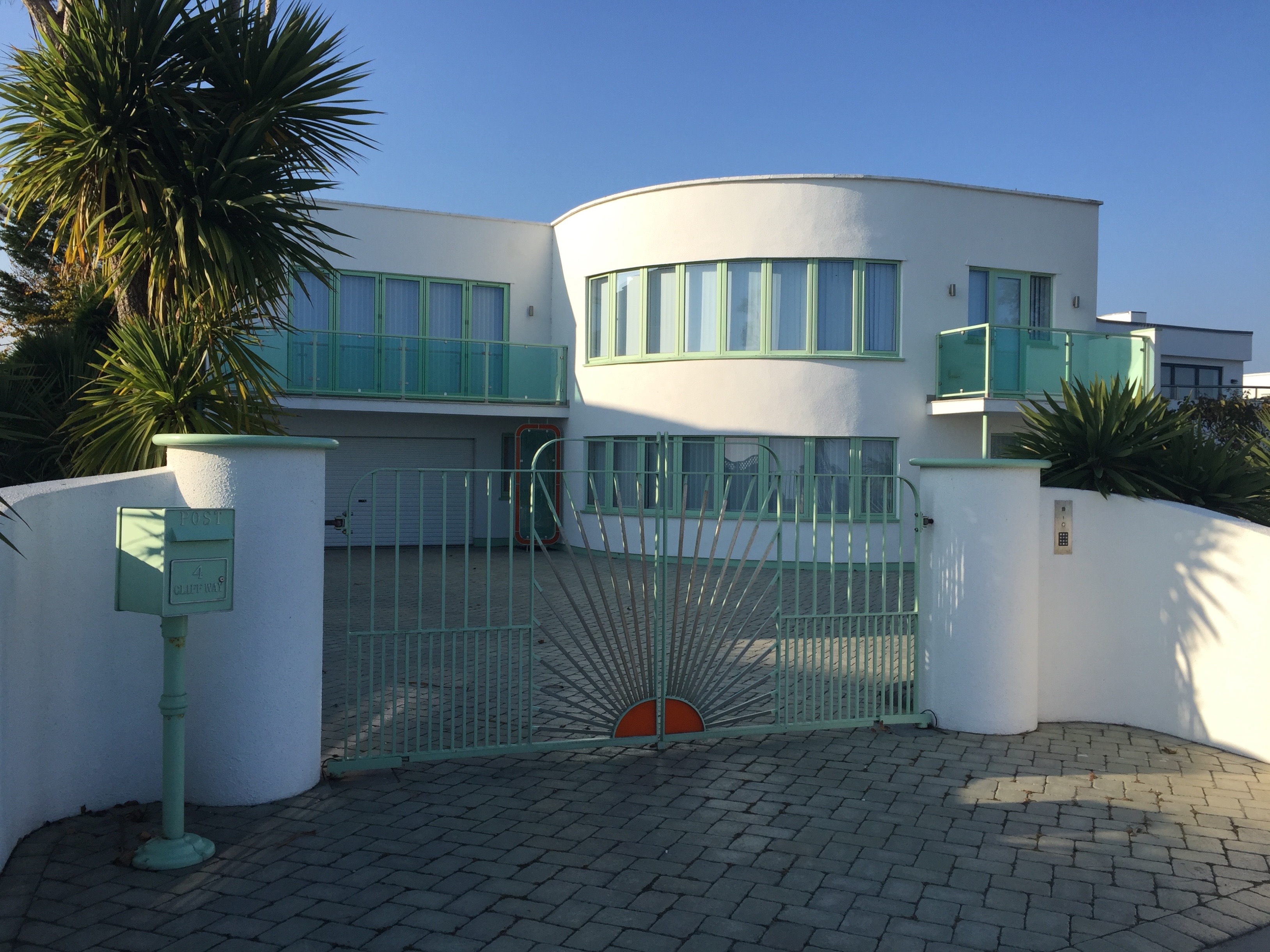 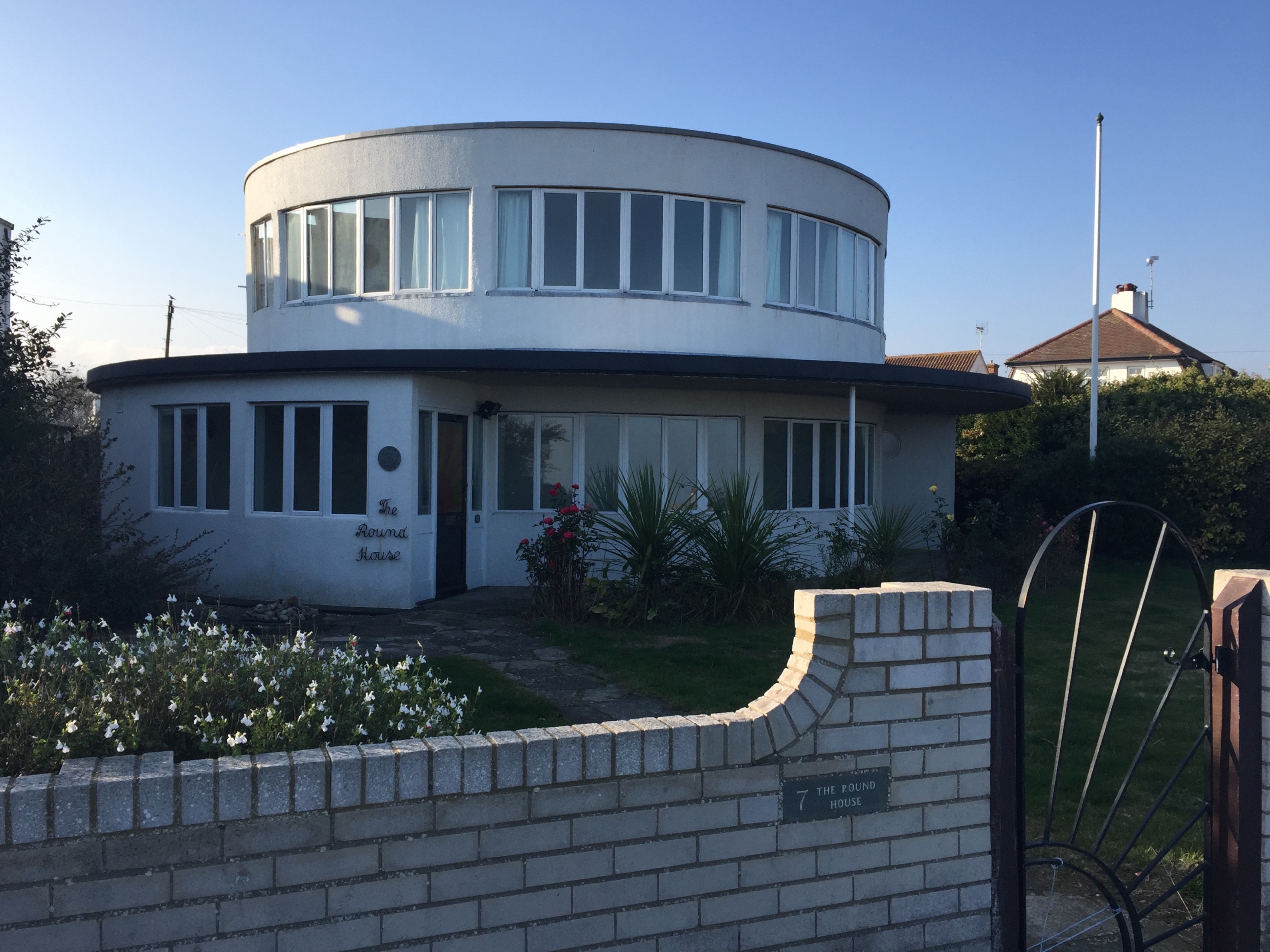 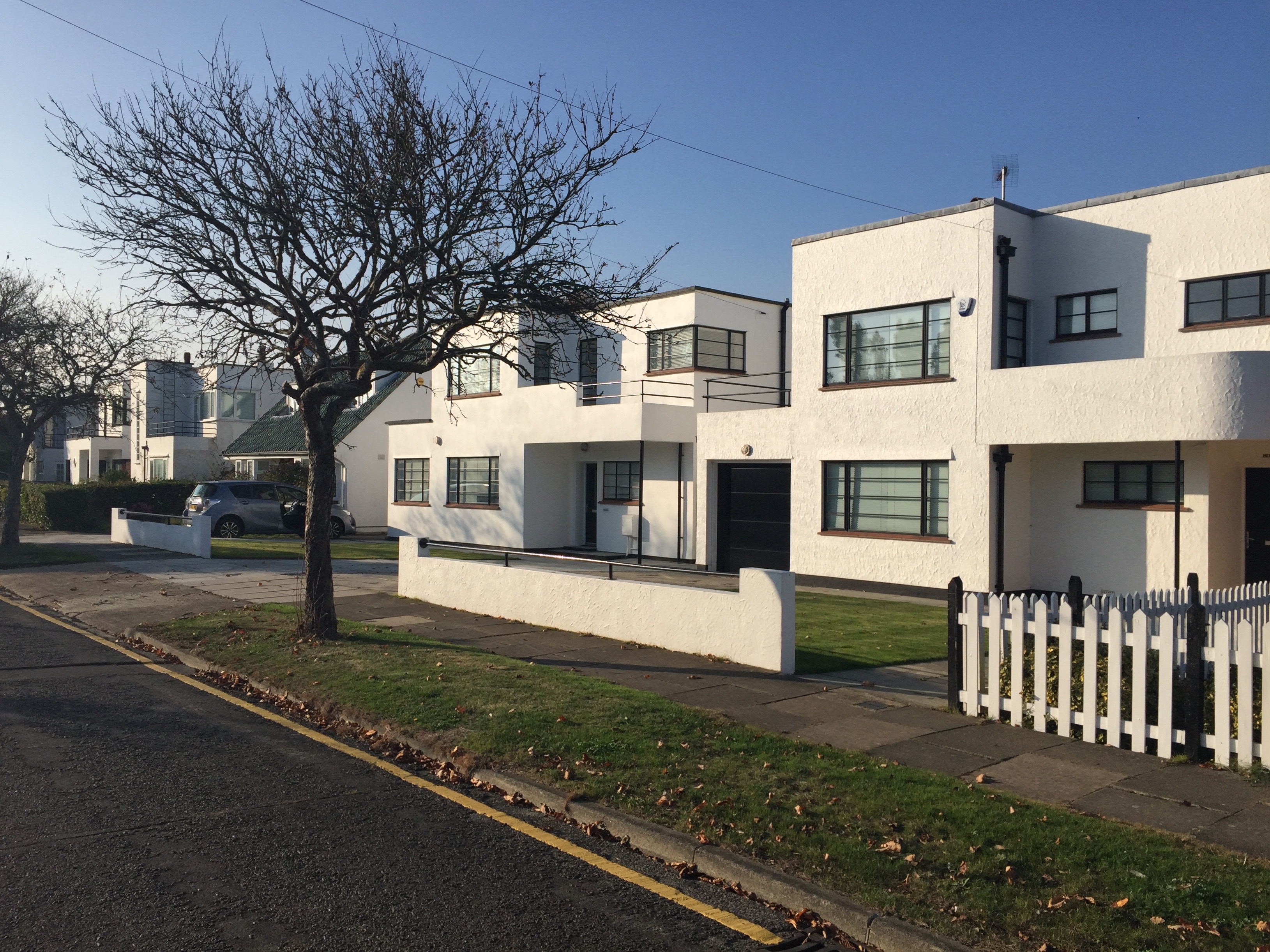 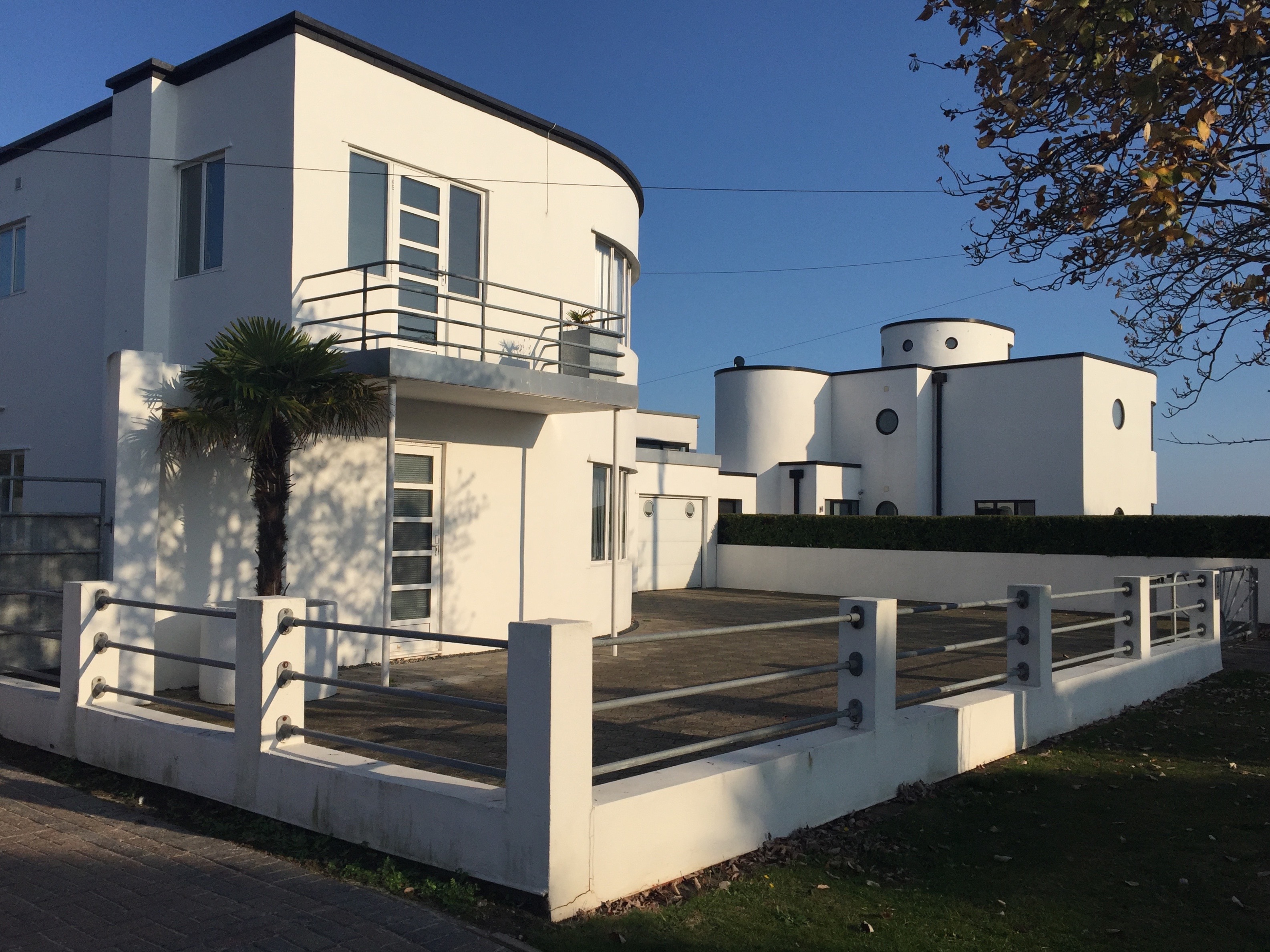 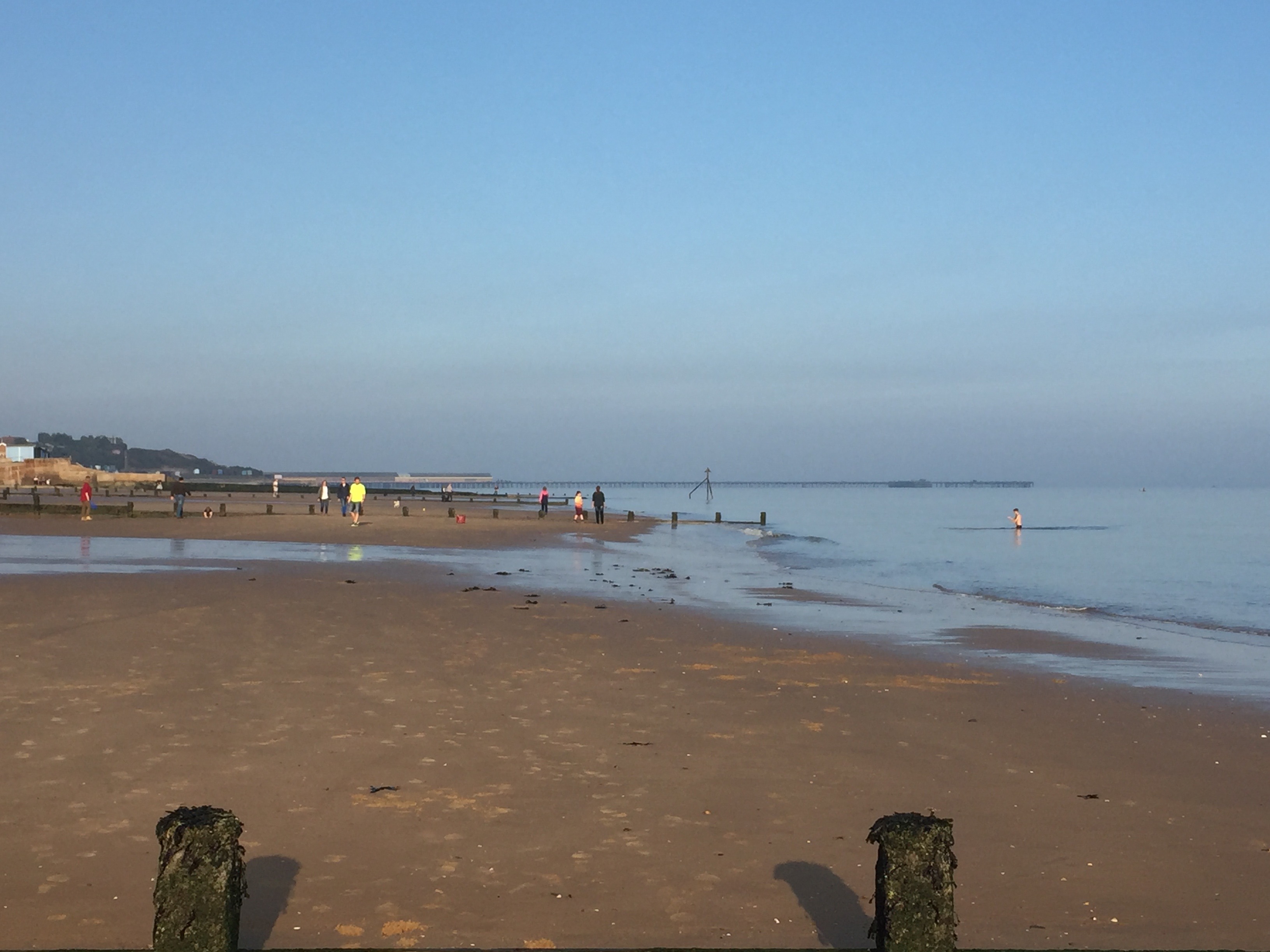 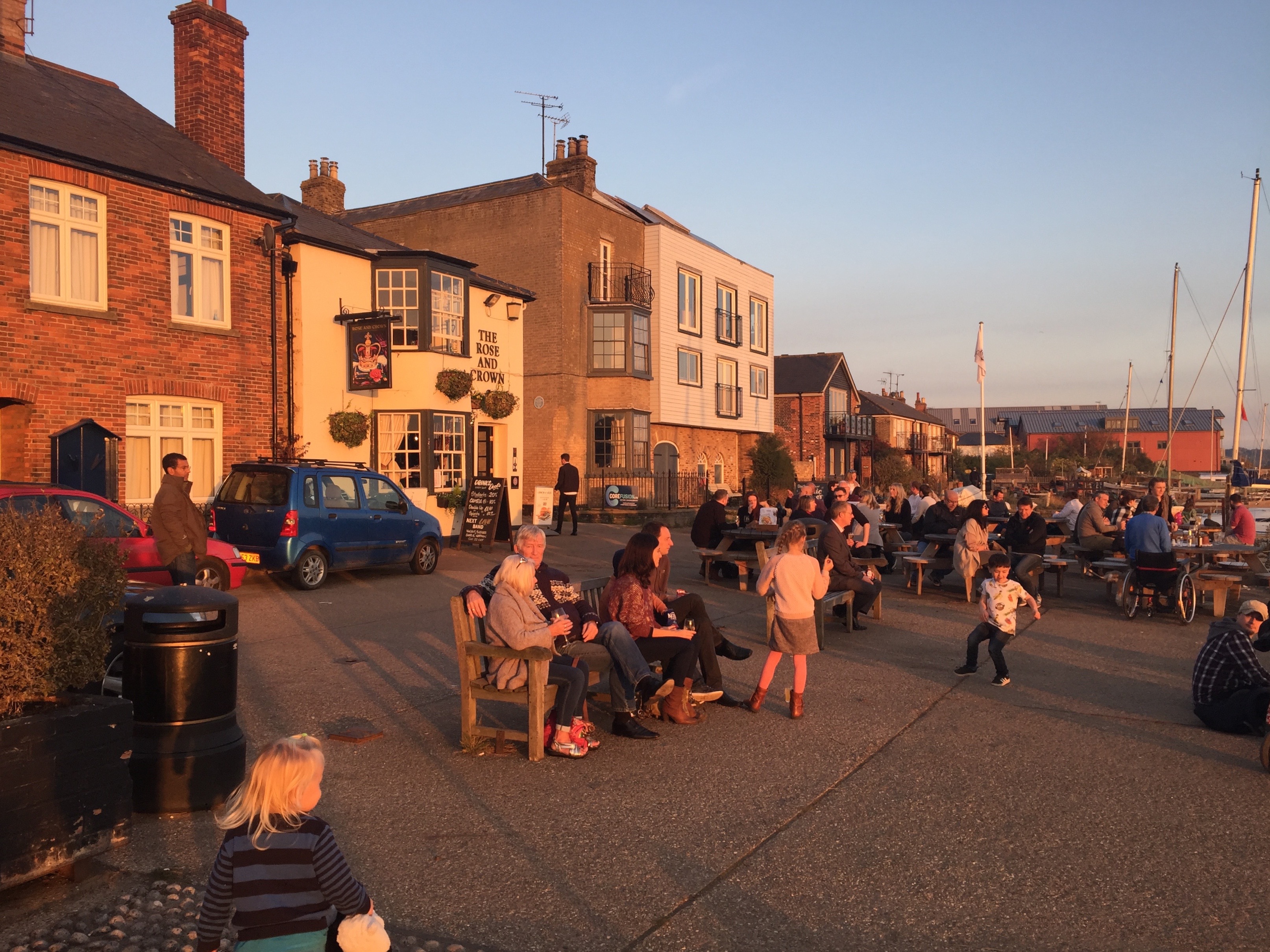 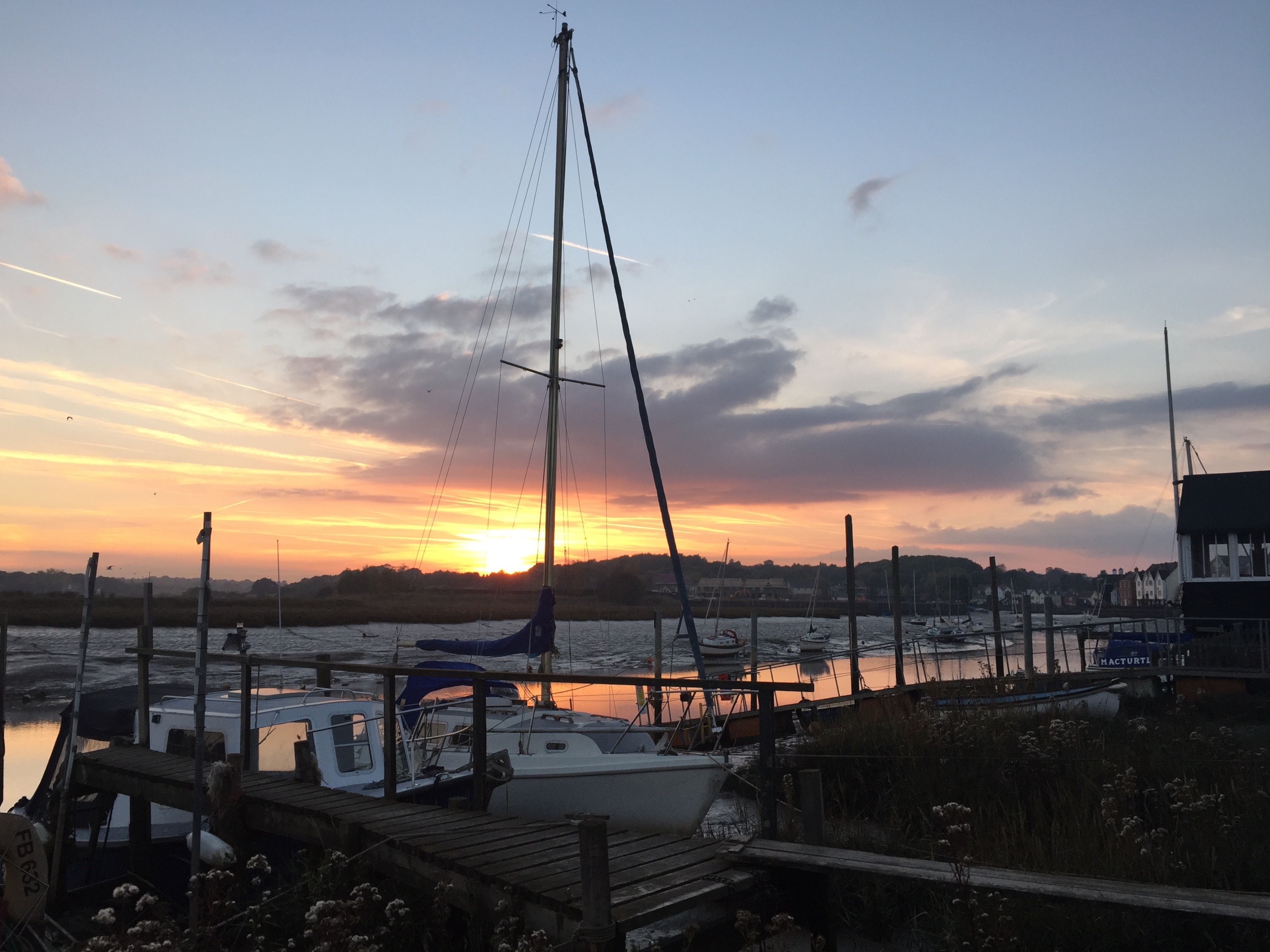