At home in a Victorian house in Highgate micro-distiller Ian Hart produces some of the country’s finest spirits. From a standing start in 2009 his Sacred Gin has won an array of industry awards and is prized by barmen (and ‘mixologists’) internationally.

Until 2008 Ian Hart was a head-hunter in the City whose main client was Lehmann Brothers. We all know what happened next, so, like many people, Hart suddenly found himself with time on his hands reconsidering his career. He had studied natural sciences at Cambridge and, after some initial experimentation with microwave technology, he drew on his love of wine and other alcoholic drinks and started researching the possibilities of distillation.

Hart’s career change happily coincided with a resurgence of interest in gin and notably London Dry Gin. New small-batch, craft gins have been emerging such as Sipsmith from Hammersmith and Jensen’s from Bermondsey, Butler’s Gin from Hackney Wick and City of London Dry Gin; premium gins like Hendrick’s, Martin Miller’s and Tanqueray 10 have already helped diversify and broaden the gin market.

The Sacred Spirit Company is named after one of the main botanicals (flavourings) Hart uses in his gin – Boswellia Sacra (frankincense). Using his local pub, The Wrestlers on North Hill, as an informal focus group, he developed the gin inspired by a 17th century recipe based on 12 botanicals, hand-distilled in glassware under vacuum. This allows the distillation process to take place at lower temperatures, retaining the freshness and purity of the aromas.

Hart keeps production levels low so he can handle them comfortably from home. Most of the raw materials are kept in the garden shed and an old wendy house is also used for storage. Inside the house the dining room has been transformed into a lab and, looking around, the old reference books and countless bottles reflect the extent of Hart’s passion which is enthusiastically supported by his partner Hilary. His sons who visit regularly have become used to having to turn up the volume on the TV if distillation is in progress.

Unlike other distillers, as well as the house gin, Hart offers individually bottled botanical distillates ideal for gin aficionados and cocktail lovers. My particular favourites are cardamom, mandarin, juniper and pink grapefruit, and I also like the wormwood, beautifully perfumed and sandalwood-like – just the thing if you fancy mixing your own absinthe! The range also encompasses vodkas (one is organic) and two excellent vermouths, English Spiced and Rosehip Cup (that make sublime Negronis).

Visiting Ian was like being a kid in a sweetshop, sipping some of the best drinks I’ve ever tasted during my twenty odd years in the drinks trade. For example, tasting his mandarin distillate has made it almost impossible to go back to manufactured, confected liqueurs like Cointreau or Grand Marnier. It was like being in the presence of a top perfumier, with a big splash of Heston Blumenthal and his liquid nitrogen thrown in.

Serving notes
Sacred Gin has a creamy, mouthfilling texture and delicately perfumed aromas. It doesn’t have the assertive juniper flavour of many other gins (eg Gordon’s, Tanqueray, Sipsmith and Jensen’s) making it better suited to short drinks and cocktails. Mixing into a long drink with tonic would overwhelm it. Alternatively, blend it to your personal taste with the individual botanicals to create your own house gin.

Stockists
Theatre of Wine
The Sampler
Fortnum and Mason
Selfridges
Milroy’s of Soho
Gerry’s (who also stock the company’s vermouths)
As well as Hart’s local, The Wrestlers, several pubs around Highgate now serve it including The Flask and St John’s Tavern.
You can also make purchases online from the website. 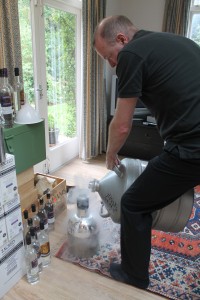 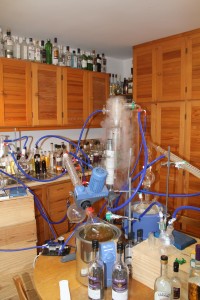 Even if there’s still a bit of a chill in the air, a glass of something refreshing and uplifting might …

With more unsettled weather expected, I arranged to take my daughter for afternoon tea at West Lodge Park. Located just …

This is set in the post's excerpt panel