When you visit Trent Park, you have an inkling that an interesting history lurks below the surface and you can’t help wondering what it might have witnessed over the centuries. It turns out that this is very much the case. The 413 acre park as we know it opened to the public as a municipal park in 1973, but its history goes back more than 1000 years.

Enfield Wood, de Mandeville and Camlet Moat
Originally Trent Park was a small part of Enfield Wood – a common land forest used by local villagers to hunt for food. Much of southeast England was heavily wooded at this time and around London traces of ancient woodland include Highgate Woods and Cherry Tree Wood in East Finchley. In the 9th century the manorial system was introduced, but the peasantry were still able to use these woods as common land.

Camlet Moat in the woods near Hadley Road is said to mark the location of de Mandeville’s castle, the original manor house of Enfield, with this point probably defining the centre point of the estate as a whole. Camlet could be a corruption of Camelot, one of several sites around Britain claiming links to Arthurian legend. For many people it still has mystical connotations. What’s more, Dick Turpin may have used it as a hide out and it was a short ride from the Rose and Crown pub on Clay Hill, where his grandfather was landlord.

Enfield Chase: the royal hunting ground
The estate was first recorded as a Chase in 1322. The word ‘chase’ referred to common land, whereas a ‘park’ was private land. Commoners had access to the Chase, but couldn’t remove deer from the estate which at this time covered 8,349 acres, about 20 times the size the current park. Only four stretches of the original Chase remain: Monken Hadley Common, Fir and Pond Woods (just north of the M25 near Potters Bar), Whitewebbs Park, along with Trent Country Park which gives you a sense of the scale.

The Chase gradually passed into royal ownership via the de Bohun family (Mary Bohun married Henry Bolingbroke, later Henry IV) and for more than 350 years it was a royal hunting ground. Henry VIII, Elizabeth I, James I and Charles I all regularly hunted there.

George III, Richard Jebb and Trent Place
In the 18th century, due to woods being difficult to manage and a growing population needing more farmland, Enfield Chase was deforested in 1777 under George III. The Chase was divided up under the Enclosure Act, but a reduced version of the hunting park was maintained which is what remains today.

Along with a knighthood, George III gave this land to Dr Richard Jebb, physician to the royal household who had helped the king’s younger brother, the Duke of Gloucester overcome mental illness during a trip to Trento in Italy. At this point the new estate was named Trent Place (later becoming Trent Park in the 19th century) and Jebb built the first house on the site of the current mansion. Designed by royal architect Sir William Chambers and considered quite modest, the mansion was built on Noddingswell Hill above the confluence of three streams, the Three Partings, where a lake was created when the grounds were landscaped.

After Jebb’s death in 1787, the mansion house passed through several hands and was progressively extended in the 19th century. (Apparently from inside the entrance hall of the current mansion it’s still possible to see part of the south façade of Jebb’s Trent Place.) The Bevan family made significant changes in the mid 19th century, along with new landscaping (the double avenue of lime trees from Cockfosters Road dates from their time) and renamed the estate Trent Park. They also carried out excavations of Camlet Moat in search of remains of de Mandeville’s castle and his treasure reputedly lies at the bottom of the well.

Philip Sassoon and his A-list parties
However, the most dramatic changes were made in the early 20th century by the Sassoon family, the British branch of an international banking dynasty. Baronet, MP and head of the family company, Sir Edward Sassoon (married to Aline de Rothschild) acquired Trent Park as a weekend retreat for entertaining. His son Philip inherited the estate and carried out extensive renovations and landscaping of the grounds.

Sassoon used 18th century bricks from Devonshire House to transform the house to more Georgian style (in contrast to the Bevans’ Victoriana). Wooden gates at Cockfosters end originally from recently demolished Devonshire House in Piccadilly were erected and the sunken garden (gravel pit) became an open air swimming pool. He also acquired three memorials from Wrest Park in Bedfordshire including the obelisk, one of the park’s most distinctive landmarks, bringing them to Trent Park in 1934. He also excavated Camlet Moat, discovering an old drawbridge. During Philip Sassoon’s heyday in the 1930s the great and good of interwar society enjoyed his lavish hospitality at Trent Park including Noël Coward, Charlie Chaplin, George Bernard Shaw, Winston Churchill, Edward, Prince of Wales and Wallis Simpson.

This came to an abrupt end in 1939 when Sassoon died. His farewell to Trent Park was in appropriately charismatic style with his ashes sprinkled over Trent Park from the air. Three months later war broke out and the fortunes of the estate took another turn.

The Second World War and Modern Era
Due to its size and convenient location the War Office requisitioned Trent Park to use as a camp for POWs, becoming a specialised long-term POW centre for high-ranking German officers. Kept there in style and comparative luxury, they were more likely to talk and divulge vital information while being under surveillance. Intelligence was gleaned about the German radar systems and the V-2 rocket.

After the war in 1951 in order to preserve the Green Belt the Trent Park estate was acquired by compulsory purchase by Middlesex County Council, with Hannah Gubbay (Philip Sassoon’s cousin) continuing to live on the estate until her death in 1968. In 1947 Trent Park mansion was taken over by the Ministry of Education, adding new buildings to the west of the mansion and in 1974 it was incorporated into Middlesex Poly, becoming Middlesex University in 1992.

While this was going on in 1973 the GLC opened the 413 acre Trent Country Park to the public. In April 1986 following the dissolution of the GLC management of the park passed to London Borough of Enfield and this remains unchanged.

As for the mansion, in 2012 Middlesex University closed the Trent Park campus, relocating it to Hendon and the following year Allianze University College of Medical Studies (AUCMS) purchased the campus site. Unfortunately, privately owned AUCMS went bankrupt in 2014 and the mansion, in need of a new owner, is now on Historic England’s Heritage at Risk Register. The sorry looking site is now fenced off and cannot be accessed from the park.

However, the ‘Save Trent Park’ campaign is working hard to establish the site ‘as a Community Asset with unrestricted public access’ and Enfield Council ‘has pledged to establish a working group to help seek out a viable future use/buyer for the site that would be sympathetic to its historical heritage’. Let’s hope the situation is resolved soon to save this fascinating property.

For more information, please read the comprehensive and detailed recent study by Parks Outreach Officer Alan Mitellas available to download here or join one of his popular walks. His Concise History of Trent Country Park has been a great resource for this piece.

To support the Save Trent Campaign follow this link.

Park facilities
As well as the impressive large open spaces, there are children’s play areas, cycle and walking paths, a horse riding trail, two cafés (the main one near the car parks as you come in from the Cockfosters Road entrance and a kiosk near the Animal Sanctuary). You can fish on the lake during the open season (with an Environmental Agency Licence). Toilets are located near the larger car parks. There is also the Go Ape activity area. 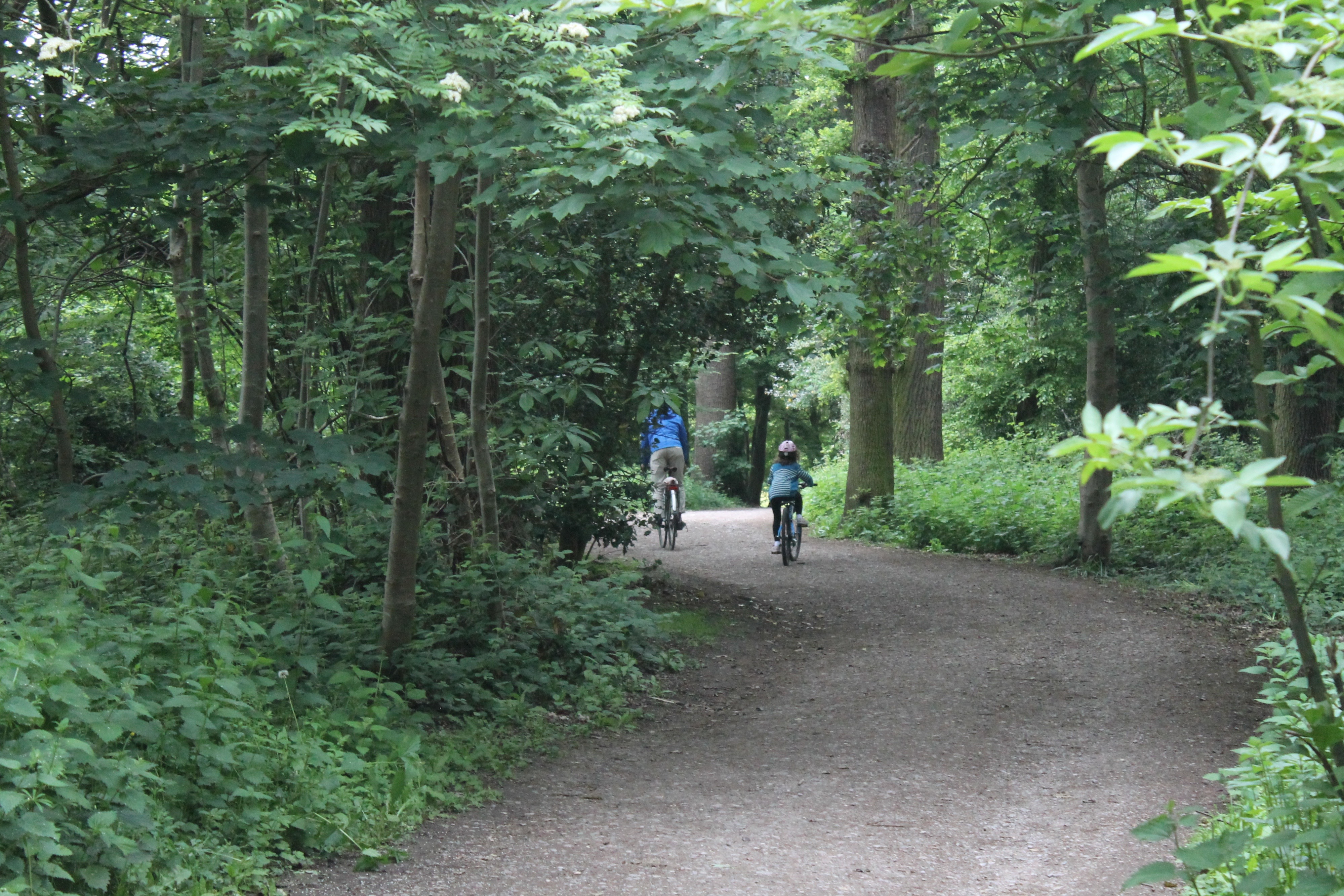 Setting up your own business is always a daunting prospect, especially for women, but some useful local inspiration is coming …