As well as having been a busy staging post on the Great North Road it’s interesting to discover that in the 17th century Barnet also came quite close to becoming a fashionable spa town. As you approach the Chipping Barnet from Hadley Common, passing sedate Georgian houses, this doesn’t seem so unlikely – a well served market town with healthy altitude and plenty of fresh air.

The physic well was, in fact, the other side of the town on Barnet Common which stretched from what’s now Wood Street down to Underhill and across towards Arkley. Take a close look at the map and certain road names point to this. Wellhouse Lane, Well Road, Wellside Close and Spring Close all refer to this feature of the area. Pepys Crescent is named after Samuel Pepys who twice made the journey to take the waters.

The spring was first discovered in 1652 and Pepys first visited in 1664. After dining in Barnet he went “to see the Wells, half a mile off; and there I drunk three glasses and went and walked, and came back and drunk three more; but I could not, my belly being full – but this wrought me very well; and so we rode home… and my waters working at least seven or eight times upon the road, which pleased me well.” 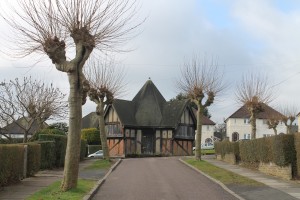 Spa towns sprung up around the country due to the perceived curative properties of water and how it eased gout and other rheumatic ailments. By the 17th and 18th centuries, these frequently affected the upper classes, although probably the result of their often excessive sherry and port drinking and diet rich in meat and wheat. Taking the waters was their equivalent of detoxing, with debatable effects, but it became important to many local economies. “For the rich and aristocratic cure-seekers a succession of routs, balls, assemblies, facilities for gambling at cards or dice, were the de rigueur accompaniments to a course of treatment.” writes Frederick Alderson in The Inland Resorts and Spas of Britain (1973).

The vogue for taking the water in Barnet didn’t continue for very long as the well was located on the Common, modestly managed by the parish and a well keeper. Attempts at bottling the water were sporadic as the spring wasn’t particularly lively so the supply was limited, however by 1663, a public house in the Strand, The Angel and Sun, advertised fresh well water from Barnet. But by 1724 Daniel Defoe remarked that, despite its earlier popularity, the well was “almost forgotten”. Whereas other spa towns had been enterprisingly constructed around springs and offered attractive facilities, visitors to Barnet’s small covered well might have had to deal with the purgative effects of the water on the open Common (if it worked its magic quickly) with locals grazing their animals. What’s more, the fact that it was close enough to London to be accessible to the lower classes also dented its chances of being a fashionable destination, a factor that also compromised the popularity of Hampstead spa.

In the early 1800s, despite the efforts of Dr William Trinder of Arkley who published many works and whose book The English Olive Tree “included the results of his scientific analysis of the well’s water, and claimed that it cleansed the system, cleared the skin, cured hangovers, and helped flagging appetites for both food and sex” according to Pamela Taylor in Barnet and Hadley Past. By then the salts were available from a local chemist, so the carriage ride or long walk to the Common was no longer necessary. Trinder’s memory is preserved as a road name.

Nowadays the only remaining sign of Barnet Spa is something that looks like a little folly – a mock Tudor hut in a small open space surrounded by housing. It’s in a sorry state, but the original well chamber still exists beneath. On the Barnet Society website there is an excellent article about this and they make the additional point that it’s a shame such an intriguing vestige of Barnet’s history can’t be better preserved.

This historic 400 mile highway linking London and Edinburgh has an undeniably seductive force and an epic scale. It’s rather …

After a brief visit earlier in the summer, it’s been a pleasure to return to GROW, the inspiring outdoor classroom …